As you may have seen over at the No Shopping Blog, I was in Vegas for Mother's Day weekend. Eric's parents were already out there for a week's stay--they wanted to see the Hoover Dam, the Grand Canyon and, of course, hit the casinos.

I suggested that Eric and I go out there that weekend and take my mom, too, so we could have a little family Mother's Day get-together, get-away.

So on Friday morning I drove to Iowa to pick up my mom and she spent the night at a hotel in St. Paul (after a delicious dinner at Red Lobster--hey, I am no food snob! and I like chain restaurants - don't judge!).

My mom had something vodka and chocolate...and, uh, vodka! 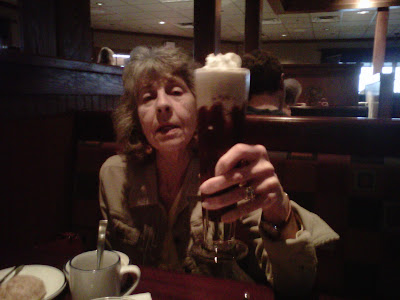 We flew out out to Vegas on Saturday morning. I am ready to go in my Sex and the City t-shirt.

We stayed at the Encore by Wynn which is an elegant boutique hotel owned by the Wynn. My mom was on the 63rd floor, the penthouse floor. She had a panoramic view. 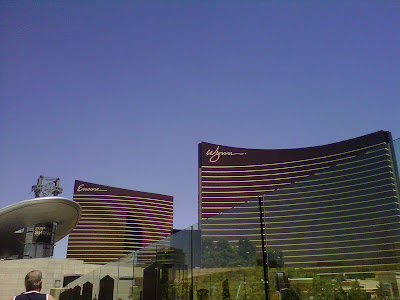 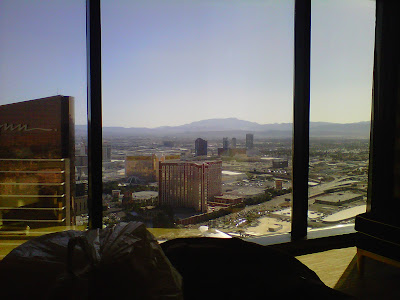 Eric and I were on the 39th floor.

I loved our room, especially the bathtub and want to live there. 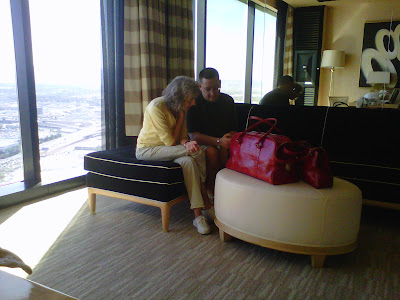 ERIC AND MY MOM - I LOVED THE FUNKY MODERN FURNITURE


On Saturday night, I put on a cute dress from Forever 21 and got out my Kate Spade clutch (a different one than the one I bought-I had 4 Kate Spade bags with me in Vegas) and the 5 of us went to a fancy dinner at the Society Cafe. After dinner, Eric and I saw Holly Madison in Peep Show at Planet Hollywood. She is one of the original "Girls Next Door". I used to think Bridget was my favorite, but lately I really like Holly and she is a huge advocate for animals. 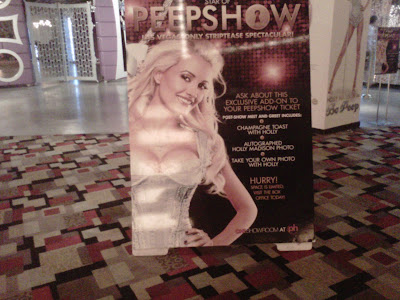 The show was titillating--sorry, I couldn't resist. A lot of boobs and butts shaking all over the place. We had great seats at a table right in front of the stage. Eric literally could put his hand on the stage, but was warned not to, unless he wanted a stiletto heel through the back of his hand.

The show was not for prudes (like me--ha ha!) and was a little on the racy side, but was done in a tasteful manner. I liked it, but I especially liked Holly. My favorite part was probably the part where they all sang about the color pink and Holly painted her love interest with pink paint.

On Sunday we did a Mother's Day buffet brunch at Caesar's Palace and then I hit Fashion Show Mall for about 4 hours. I got my hair done and went shopping at Kate Spade and Nordstrom and got a strawberry Frappucino at Starbucks.

That evening Eric spent it with his parents (gambling) and I spent it with my mom at one of the restaurants downstairs. Or rather my mom ate, and I had an iced tea and 2 or 3 French Fries. I was still full from all of the champagne at the brunch. Those bubbles! Then I actually had an early night and went back to my room to watch "Desperate Housewives". Okay, I know I am lame!

Monday Eric and I walked down to Caesar's Palace because I wanted a daiquiri (yes, a daiquiri for breakfast, this is Vegas!) but we found out after walking all the way down there that they didn't open til 10 a.m. and it was only 9 a.m. So we found a place that was selling champagne in the center of Caesar's Palace, and I got these photos of the fish in the giant aquarium. 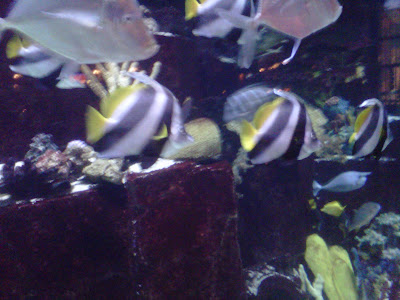 Then the 5 of us met up at the Wynn and did a little gambling. I won $10 - woo hoo! I will say that my husband won close to $500 playing Black Jack and his dad won over $800 on the slot machines. But those two (and actually Eric's mom) are much more serious gamblers than I could ever be. I would rather spend my money on a cute handbag--because that is a sure thing!

Then it was time for yet another buffet. Honestly, it is a miracle I didn't gain weight over the weekend--I am happy to report I actually lost 2 pounds. But there was a whole LOT of walking and I never really ate later than 2 or 3 in the afternoon most days & then I was done.

After that it was pool time for me and more Black Jack for Eric.

Then one of the favorite parts of our vacation. Serendipity 3! 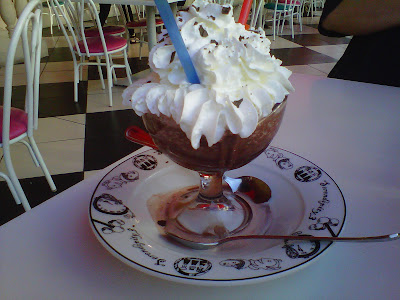 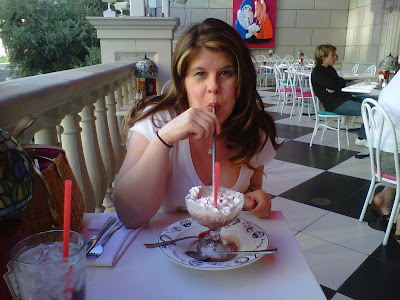 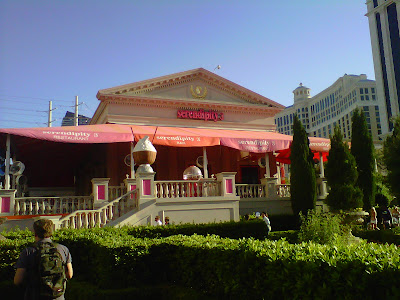 I had the Frrrozen Hot Chocolate, which was delicious and filling but I could only eat about 1/3 of my cheese omelet after that and only 2 of my fries.

Then that evening we rode up to the top of the fake Eiffel Tower at the Paris Hotel. We were in the middle of a windstorm and it was freezing up on top. I took a few pictures before freezing to death. 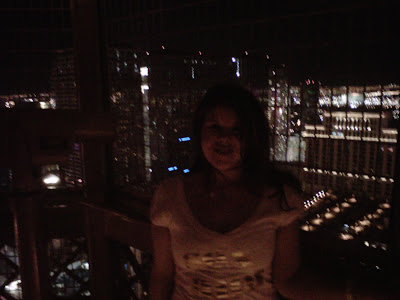 I AM A GHOST 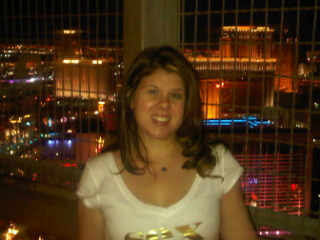 OH WAIT, THERE I AM! 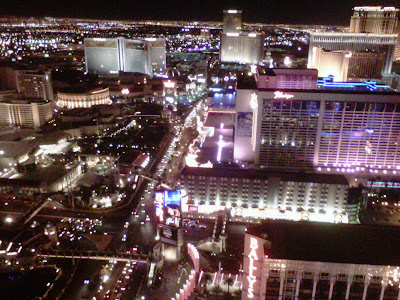 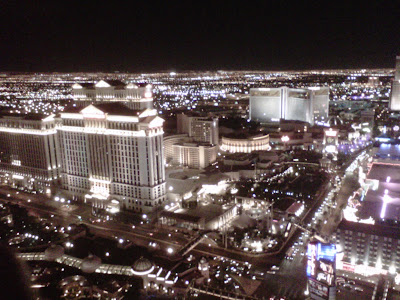 VIEW FROM THE TOP OF THE EIFFEL TOWER

Tuesday was our last day there. I finally made it back to Fat Tuesday's to get my peach daiquiri and then Eric and I and my mom had a really yummy lunch at one of the hotel restaurants--I can't remember the name! But I had a shrimp salad, and then spent the rest of the day at the pool.

The weekend went really fast and for the most part it was a lot of fun. My favorite parts of the trip were Serendipity 3, Peep Show and our fabulous hotel.

I so want to visit Vegas! I can't believe I have never been there.
Your trip looks like so much! I'm glad you enjoyed it! :)

Amber, you have to go! I have done Vegas with just my husband and now with family. I would suggest a girl's Vegas trip! It would be a whole different experience. :)

I want to go to Vegas again! Have not been for three years or so...

Lisa, it is time!

You always make your vacations sound so fun! I love Vegas, but I'm usually exhausted when I return from walking and watching E gamble. Next time we'll split up like you and your hubby do. ;)
Trisha

I have never been to Vegas! So thanks for showing me some of it :)

You look so skinny!!

I have never been to Vegas! It looks amazing, but Alan and I aren't gamblers. (well, besides maybe buying a lottery ticket here and there.)

gotta love the sex and the city tee!

hiya luv! your blog is so cute!!! :) I love it!
smiles,
gina
http://hiyaluv.blogspot.com