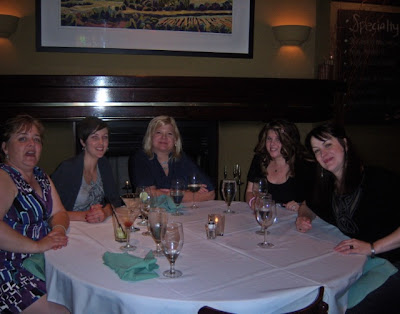 On Saturday I attended my first ever blogger dinner for Minnesota bloggers. It was a fun gathering organized by Cathy at Antsy Pants and Lisa at Mommy’s Nest.

I was a little nervous at first and I was the first to arrive (which was a shock because usually I am late and on Lesli time). But as soon as I saw Lisa I relaxed and felt comfortable because she was so warm and welcoming and we chatted for a few minutes in the lobby before Cathy showed up. I later found out that Lisa used to be a DJ for KS95 which explains her bubbly personality. 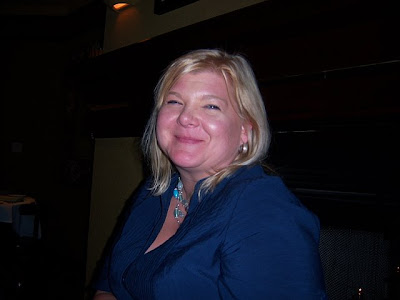 I originally “met” Cathy when she won a Kate Spade makeup bag from one of my favorite bloggers Elledee at Glammed. I decided to see who this lucky Cathy was who had won a Kate Spade bag and so I checked out her blog. I was so excited to see that we have the same birthday (October 13) and that she is an interior designer, which is what I went to school for. I loved her right away and have followed her blog ever since.

So we were seated at our table and ordered drinks (and we got carded by our waiter). I ordered white wine and Cathy and Lisa had cucumber martinis (I think, right?).

Shortly thereafter Whiskey Marie showed up to join the fun. She ordered a Manhattan and I think it is the first time I have ever been with someone who ordered that. Now I know what it looks like (it has a cherry). And bourbon, I think. She has the longest lashes I have ever seen in my life and I found myself wondering if she uses Latisse? 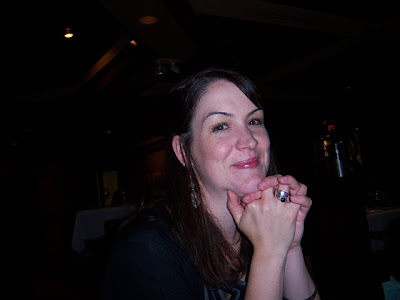 And to complete our group was Minnesota Mom from Happy to be From Iowa and her cute teen daughter (who was the designated photographer). She is originally from Iowa (oh, can you tell from the name of her blog?) and she actually grew up in the next town over from where my mom now lives. So I bonded with her over the whole Iowa thing but I also just adored her because she was so kind and had such a wonderful outlook on life despite some recent difficulties. She was just an angel! 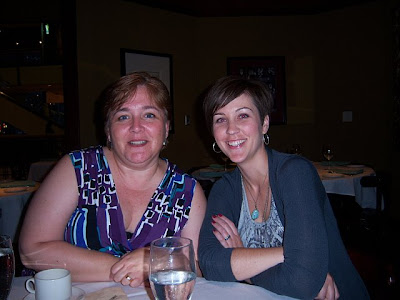 She also came to my rescue after dinner when I realized Nordstrom was closed and that was where I had parked my car. She insisted on giving me a ride to my car. She and her daughter were just two peaches in my eyes! Loved them. Maybe I also love her even more after she wrote on her blog that I reminded her of a combination of Bernadette Peters & Debra Messing!

As far as the meal went, I can’t even tell you what everyone else ordered but I had a shrimp cocktail and the best ever bleu cheese mashed potatoes, 2 glasses of Riesling and a coffee for dessert.

Our meal lasted almost 4 hours. The time flew by. Everyone was so wonderful and I loved them all. They all had stories to tell and other blogs to share. The wonders of social media, I tell you!! I hope we can do something like this in the future and I plan to stay in touch with everyone.

I love it!!
Yes, we had cucumber sage martinis and they were delicious!

I agree with everything you said, and can't wait until we do it again. I had so much fun meeting everyone.

-->I'm glad you had so much fun. I've been a regular Cathy reader for awhile. ;-)
~deb
www.WebSavvyMom.com

I had a great time too! You ladies were a treat to hang out with- we have to do this again sometime. It's so nice to finally meet some more local bloggers!

(And no- I don't use Latisse. I'm just one of those "dark" German girls and got lucky with the lashes, I guess. Oh, and I use Cover Girl Exact Lash, which is the bomb.)

LOVE your post! It was such a great time. My strawberry/basil martini was soooo good that I looked it up and will try to replicate at home.

I am glad you put this up! I cannot read your SACT 2 review until I get to see it!!! :) So nice. Loved the pictures!

So fun! I wish we lived closer!!

Lisa if you decide to read my SATC 2 review, I PROMISE I gave nothing away!!

Lesli! It sounds like you had a fabulous time!!! It also sounds like every blogger I follow lives in MN!!! I need some blogger friends around me to hang out with! :) I am in DE!! How did you meet people near you?!

I love manhattan's! They are my drink of choice so I had to chuckle at your cuteness when I read your little snippet about manhattan's. Also, I really want to try a cucumber martini! That sounds divine!!
smiles,
gina

Glad you gals had fun. I want more scoop on the blogger gossip though of course.

So fun! Come to Dallas so we can have a meet up!

Surfer Wife, the menu is influenced by Napa Valley and of course a celebration of wine.

Stephanie, would you believe I have never even been to Dallas??

I do not know you (but what a fun blog this looks like) but I do know Mnmom and Whiskey Marie from my own blogging. To see this photo with both of them in it makes me so happy.

Having been to so many blogger meet ups here on the East Coast, I know what fun it can be.

And I want to meet WM and Mnmom!