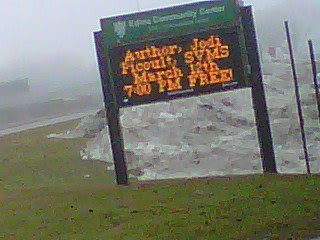 On Friday, my friend, Amber, came up from Des Moines to spend the day in Minneapolis with me so we could attend the Jodi Picoult book singing. It was our second Jodi book signing. We went last spring, too, when it was held at the Border's in Roseville at Rosedale Mall.

We met at the Perkins in Edina, the one off of 494 and France, which I guess is techically on the Bloomington side. I like that one the best because it seems like the prettiest Perkins with the nicest bakery and a little known secret--this Perkins serves wine!

We met for a mid-afternoon snack. I decided on coffee since I had just had lunch with my husband beforehand. Then were were ready to get going because Amber had two things she wanted to do--go to Trader Joe's (because they don't have them in Iowa) and go shopping at Half Price Books. I think she bought a couple of books at Half Price, and at Trader Joe's I know she was able to get almond butter and peanut butter stuffed pretzels and a bunch of other things that I have forgotten about! 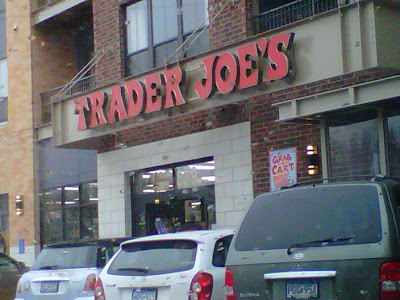 After that we went to yet another Perkins in Edina, this one is the older, smaller one off of Highway 100 and just up to the street from the book signing. My other friend, Donna, met us there for an early dinner and she brought her almost 2-year-old daughter who is quite entertaining at that age. I noted that she eats like an animal except she can use a fork--ha ha! I also found it quite entertaining to tell her a name and have her repeat it back to me, such as Lesli. Noodles. Daisy. Endless entertainment!

Anyhow I ordered the shrimp trio with macaroni & cheese and a piece of cherry pie and then it was time to go to the book signing. It was held at the Edina Middle School auditorium. Minneapolis was very lucky to be able to host a free book singing. Most cities were charging for tickets, as much as $25 or $30. This book signing sponsored by Barnes & Noble was for Jodi Picoult's latest release "House Rules" about a young man with Asperger's Syndrome, which is a high-functioning form of autism.

Amber and I got there plenty early and we had the best seats in the third row right in front of the podium. They were awesome seats. We could have seen every hair on Jodi's head! But then we realized that where we were sitting would make us have to stand in line forever for the book signing after the reading as they were dismissing people from the back of the auditorium and from the opposite side from where we were sitting. We reluctantly gave up our primo seats because we didn't have time to stand in line that long. Amber had to get back on the road. So we switched seats and went to the back. But I think we made the right decision.

After the reading and a Q&A session, which were both really interesting, we were able to get in line for the signing and only wait for maybe 20 minutes or so. It didn't seem that long. Amber had two books to be signed, Jodi Picoult's newest one and her very first one. I was empty handed but she did look right at me and ask me about the bracelet I was wearing. It is my big purple flower bracelet that I bought at Anthropologie last December. She asked me if it ever got caught on anything. I said (brilliantly), no, not really. My moment! 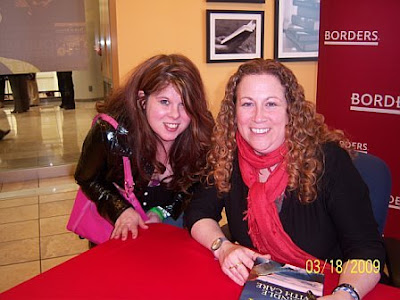 I've been meaning to ask you how is Emily Giffin's new book? I can hardly wait to read it!!

Kristie, I haven't read it yet! I have like 4 other books from the library that i need to finish before they are due back. I think I will get to it by next week tho!

I'm going to be having a huge giveaway soon and I want you to enter it! Probably in about 2 weeks. Just wanted to let you know! :)

Thanks for letting me know, Kristie.

Of course, I will enter your giveaway!

Oooh looks fun! Totally jealous I just finished another Jodi Picoult book this weekend, she's so awesome! I can't wait to read her newest one!

Sounds like it was a fun day! I don't know that I've ever read any of her books. I'll have to find one!

Cathy, her books can be really intense & emotionally draining. I always have to read something very light & fluffy after one of her books.

I had so much fun in Minneapolis with you Lesli!! I love the day trips I have made up there so far, we should do it again sometime soon! :)
Thanks for putting up with me and my weird obsession with Trader Joe's! I just had to see what the fuss was all about! I'm loving the peanut butter stuffed pretzels but the almond butter is SOOOO rich. You only need a tiny bit! Very different from peanut butter.

I absolutely LOVE her books. Any time I fly - my most hated and feared thing to do - I buy myself a new Jodi book and settle down to read, and it's just about to only thing that doesn't include an alcohol content that gets me thru. The only problem is, I miss half the holiday sitting on my sun lounger reading the book I simply can't put down...!